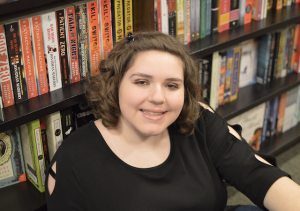 I declared my English major relatively late in my undergraduate career having already declared majors in Cognitive Science and Psychology with a minor in Theatre.  English literature had always been an interest of mine, and I had long denied myself the opportunity to pursue it on the collegiate level.  Ultimately, my eventual decision stemmed from an introductory level creative writing course that renewed my passion for literature.  With that re-ignition came the realization that the study of English is extremely interdisciplinary and lends itself to exploration on multiple levels.  I declared my third (and final, I swear) major, English, the summer before my third-year as an undergraduate and haven’t looked back since.

Personally, the major has affected me profoundly and directly, as I am hoping to pursue a career in English academia.  However, to address those not wishing to pursue this path, my English major has grown my skills as both a critical thinker and a scholar.  The skills that I have learned and honed through my courses in the department are certainly going to be key in my future professional success.  Writing surrounds us in every aspect of daily life, and being able to manipulate and interpret it effectively is integral to nearly every career in existence.

I am frequently met with this question as someone who straddles the line between the humanities and the social sciences here at CWRU.  The reality is that our English department is alive and thriving.  With resources from the Baker Nord Center for the Humanities, frequent departmental colloquia, Sigma Tau Delta (the International English Honors Society), and incredibly accomplished faculty from the field, English students have numerous resources and a plethora of ways to engage in critical conversations on all levels.  Our English department is a tight-knit welcoming community of inquiring minds of which I am extremely proud to be a part.

English is a challenging and rewarding area of study.  The faculty and students here at CWRU are open and passionate about the topics being discussed.  Additionally, as I already mentioned, an English major can help develop your skills as a reader, writer, and analytical mind.  Constructing and defending arguments is an extremely important skill set to have, and English allows you to develop those skills while determining your own stance in the world.  English students are not trained to blindly accept arguments as fact, but are encouraged to dissect pre-existing ways of thought in order to determine where they fit into the larger discussion.  Having the ability to go into class every day and experience this swapping of ideas is not only tremendously intellectually fulfilling, but it will also be sure to benefit a student regardless of the career path they choose later down the line