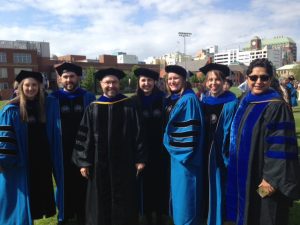 CWRU: How did you first come to write mysteries? And why mysteries particularly? And why funny mysteries?

Costa: Actually, I wrote my first mystery story at the age of ten, and during my teens I was very drawn to romantic suspense. Nancy Drew happened early, and Sherlock Holmes, and Agatha Christie – which is something you’ll hear from many mystery writers. From childhood I have always loved what’s mysterious, and if it’s also grand and important besides, I’m happy.  The farther I got in my education, the deeper I felt the tug toward stories that fall anywhere between the detectable and the forever unknowable.  And in the most satisfying tales, I want it all – richly drawn characters, complex plots, themes of crime and human nature. As for funny, I love the experience of reading it because it’s especially hard to do when murder – so serious! – is afoot, and as a writer I like infusing a crime story with some humor because life holds what’s terrible and delightful in balance all the time.

The entire interview may be found here.

Michael Clune‘s article—“Virtual Reality Reminds Users What It’s Like to Be Themselves”—has been published in The Atlantic.

Matthew Feinberg delivered an invited lecture at Vanderbilt University for the Department of Spanish and Portuguese entitled “New Stages of the Crisis: Theater and Urban Space in Contemporary Madrid.”

In June, Sarah Gridley will serve as a panelist with Jeremy Bendik-Keymer, Beamer-Schneider Professor in Ethics, and Amy Linch, Lecturer in Political Science, at the 2016 Annual International Society for Environmental Ethics Conference at Pace University.

Mary Grimm’s story “Moonville” has been published in Appalachian Heritage.

William Marling published “The Neustadt Prize and the Framing Effect” in the spring 2016 issue of World Literature Today.

Suhaan Mehta has won this year’s Richard A. Bloom, M.D. Award for Distinguished Teaching in the SAGES Program.

In March, Annie Pecastaings gave a paper entitled “Vergil’s Corycian Gardener and Voltaire’s Candide,” at the annual meeting of the Classical Association of the Middle West and South (CAMWS) in Williamsburg.

James Sheeler has been awarded the Carl F. Wittke Award for Excellence in Undergraduate Teaching.

The works of both Thrity Umrigar (The Story Hour) and Brad Ricca (Super Boys) have been selected for the Choose to Read Ohio book list for 2017 and 2018.

Ongoing Projects: Attempt at a Mythology

Everything you’ve heard is true. Yes, all poets secretly and insufferably suspect themselves to be Orpheus, singing all the way to the underworld. Some of us will even admit it.

So perhaps it was inevitable that my first book, Weather, would treat the geological and human landscape of my native Cleveland in mythical terms. The poems of Weather represent both the effort to stake a claim on behalf of a place and to chart its contours in poetic language.

It may have been inevitable as well that I would then return to another kind of home, the mythological stories I loved as a child, and those I’ve come to know since. The poems I have been writing in the last few years, now collected in a manuscript called Attempt at a Mythology, continue the effort of mythmaking.

In this project I have tried to rework themes and reimagine characters from mythic and religious texts to explore their contemporary resonances, the ways in which the power of stories and these stories about power continue among us and against us. These poems would contribute to an individual mythology that might nevertheless transcend individual personality.

They would hear, think through, and respond to the Hebrew Bible, the Egyptian Book of the Dead, the Iliad, the Metamorphoses, the gospels, The Golden Legend, folk and fairy tales, the urban legends of adolescence, and more. If the poems of my first book map out my own plot of earth, these new poems attempt to expand the scope of the world they—and I—seek to know.

I think of myth less as subject matter than as a method for providing the illusion of personal encounter unique to lyric poetry. In other words, the metaphor (okay, technically a simile) that compares “thee to a summer’s day” is a myth that lasts only an instant, but that allows us to understand more clearly the “thee,” the “summer’s day,” and maybe even ourselves, whoever we are.

Faculty of the Past:

In the Community
Upon moving to the Cleveland metro area in 1912, Thompson was active in the surrounding community, especially in religious and historically oriented organizations. Thompson was a pastor for the Glenville Congregational Church in Cleveland, Ohio, until he became a member of the Case School of Applied Science faculty. Additionally, he was a member of the New England Society of Cleveland and the Western Reserve, acting as the organization’s secretary in 1934 and 1935. From 1944 to 1947, Thompson served on the Board of Trustees for Schauffler College (no longer extant).

Career at Case School of Applied Science
Thompson’s long career at the Case School of Applied Science began in 1914, when he was hired as an instructor in English. In 1918, he was promoted to assistant professor and the head of his department—a position he would hold until 1946. In 1920, he became the secretary of the faculty senate and in the following year, Thompson assumed the role of librarian for CSAS. Not long after, he became an associate professor in 1922, followed by promotion to professor in 1928. In 1947, Thompson was named professor emeritus and maintained active connections with the school after his retirement in 1950.

Thompson was an unrelenting advocate for the college’s library during his time as librarian from 1921 until 1942. His interest in the acquisition of books and the importance of a quality research environment extended throughout his career stretching into his position as the first archivist for Case. In his later career and into his retirement, Thompson was an avid collector of all things related to Case’s past, expressing his intentions to write a history of the school. In keeping with his enthusiasm for the school, he also wrote a large number of poems in various styles about Case and teaching at the school.

Thompson was the creator of the Karl Owen Thompson Collection at Yale University. Housed in the library’s Manuscripts and Archives division, this collection contains approximately one hundred letters related to the School of Divinity and past college presidents.

In 1956, Thompson was presented with the Meritorious Service Award from the Case Alumni Association. Records note that “His scholarliness and personal charm won him the warm respect of the students during the 33 years he was a member of the faculty.”

Publications
Thompson published a number of pieces in technical writing, something that was key to his position. His book, Technical Exposition: A Textbook on the Application of Exposition to Technical Writing, Designed for Students in Scientific, Agricultural, and Engineering Colleges, served as a textbook for technical English courses at Case and other universities.

St. Bonaventure University has named Dr. Andrew Roth (’70) as its interim president. The university expects Roth to serve for the entire 2016-17 academic year.

Marie Lillian Vibbert (’10) has a story—”Hold the Moment”— in Analog.

During spring semester of my junior year, I began an internship in marketing, communications, and events at the Mentor Area Chamber of Commerce. I live in Mentor and am very familiar with the community, so it seemed like a perfect fit for me. I quickly realized how much my writing skills became relevant to my internship, and I loved being able to apply what I had learned. I was constantly using the things I learned in my English classes to complete tasks. I communicated with people in order to get sponsors for events, something vital to the organization. Being able to clearly state goals and negotiate with others is very important to my job. I began creating web content and social media, two things that focus heavily on writing and that are extremely important for marketing at our organization. I was also tasked with the job of presenting new ideas in front of a variety of people including board and committee members, volunteers, and co-workers. My English major seemed to prepare me for each of these aspects of my job.

My managers appreciated my skills and knowledge, and they offered me a permanent position as Marketing and Communications Coordinator, an opportunity that has never been afforded to an intern in the past. Essentially, they created this position for me based on my skill set. I now write newsletters to our entire membership and affiliates, giving them news, links to web content I have written, and social media I have posted. In addition, I work on planning and marketing events and fundraisers, and still work heavily with our sponsors. I am constantly thinking of new ways of getting information about our organization to the entire community and involving as many businesses and volunteers as possible. Essentially, I am the voice of the Chamber on the web, in emails, and in all social and written media. I have even had some advertisements for the Chamber’s events printed in local newspapers. Often, I am also the main contact when it comes to some of these events. While it is challenging, I love being able to share the message of an organization I truly believe in with thousands of people. As I’m settling into my new position, I know that my English major has helped lead me to a path where I love what I do.

English is one of the most fundamental and resourceful degrees that one can receive. It was not until I applied the skills I learned as an English major that I realized how important and versatile they are.

Be sure to add SXD290@case.edu to your address book to make sure these messages appear in your inbox.