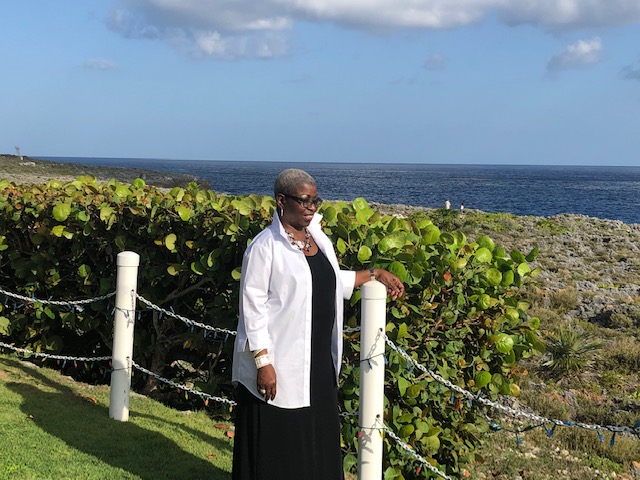 Teaching has always been my first love, so it is sometimes hard to believe that after 45 years of working in the academy in one way or another, I am finally retired. I don’t even like the word “retire,” so I prefer to say I have now pivoted, as of June 30, 2021, to a new chapter of my life. During the spring of 2021, I taught a Department Seminar on “Toni Morrison, James Baldwin, and Ta-nehisi Coates on Race in America.”  It was the perfect “swan song” course because it brought together many of the pieces of my journey inside and outside of the classroom as a faculty member, academic leader, and community activist. The students in that course worked so hard and were so engaged that they almost made me change my mind about retirement, but I knew it was time and so here I am in my new beginning.

As I reflect on my journey in the academy, it has been nothing short of amazing!  Now as a newly ordained minister, I have a new way of reading the past 45 years as somehow divinely orchestrated in ways I could not have predicted or understood as they were unfolding.  From teaching in an adult education program at Columbia University in the 1970s while I was an undergraduate student at Barnard to teaching in the CWRU Siegal Lifelong Learning program, I have always found the classroom to be what bell hooks calls “a radical space of possibility.” Whether at an HBCU (historically Black college and university), a public university, or a private one, I have enjoyed the work of reading, teaching, interpreting, and critiquing literature with my students. The opportunity to share knowledge, engage in dialogue, and think critically about what others have written and said is the best thing about the academy. When I think back on my three degrees—all in English—from my BA from Barnard, to my MA from New York University, and finally my PhD from CWRU—they created a whole world for me to contribute and make a difference and for that I am eternally grateful.

Even when I moved from the classroom to leadership roles, I always kept one foot in the classroom. This was true at George Mason University where I taught for 19 years and served as founding director of African American Studies and Associate Provost for Educational Programs. It was true at Bennett College where I served as Provost, and it was true at CWRU, where I returned to serve as the inaugural Vice President for Inclusion, Diversity and Equal Opportunity and one of the founding faculty members of the new minor in African and African American Studies. Even as the university’s senior diversity officer, I developed a new course for SAGES on “The Meanings of Difference: Constructions of Diversity in American Culture,” to engage with students across disciplines about issues including but not limited to race, ethnicity, gender, sexuality, class, ability, and religion. I remain convinced such a course should be required of every student, regardless of their major or field of study. My courses were often cross-listed with the minor in Social Justice, Ethnic Studies, and Women and Gender Studies because I believe in a dialogic approach to pedagogy, and I wanted my students to understand the value of interdisciplinarity and intersectionality, even as I affirmed the value of the humanities and cultural studies.

As a Toni Morrison scholar, I offered undergraduate and graduate courses on the Nobel Laureate and I usually included her work in other courses such as my course on the Harlem Renaissance, Slavery and the Literary Imagination, and courses on other American authors. I remain amazed at how relevant her fiction and non-fiction has been to struggles in the academy and in our society.  As she says, “we do language…[t]hat may be the measure of our lives.” Her death at the beginning of my sabbatical rocked my world. Yet her model of connecting the arts and humanities with the issues of our time is one that continues to inspire my own work as an intellectual and as a woman committed to helping to shape a more just society.

My publications include Folk Roots and Mythic Wings in Sarah Orne Jewett and Toni Morrison: The Cultural Function of Narrative (LSU Press, 1991), one of the first cross-cultural studies on Toni Morrison, and a memoir The Strawberry Room and Other Places Where a Woman Finds Herself (Westbow Press, 2016), and a host of chapters and articles in refereed journals and edited volumes in American and African American literature. I edited one of the volumes in the Schomburg Series on Black Women Writers and I am currently at work on completing a book-length study on the work of Toni Morrison, which is tentatively titled “Toni Morrison and the Geopoetics of Place, Race and Belonging: Re-imagining Spaces for the Reader.” I could not predict how going into administration, changing institutions, and navigating the other vicissitudes of life would affect my writing life, but I’m enjoying the time and space to read and write more. And my seminary course work, community engagement, and preaching all have me thinking more about the intersection of faith and social justice.

Returning to CWRU in 2009 not only gave me a chance to engage in important leadership at the executive level and teach new students, but also to reconnect with former professors and colleagues in the department and to make new friends. I truly appreciate the friendships that endure. Finally, despite the vagaries of the pandemic, retirement means I now can spend more time with my sons and my family. I plan to visit my grandchildren as often as I can and regale them with boring stories of what a wonderful life the world of books has created for their grandma!