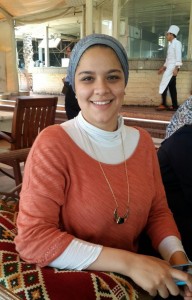 1. What drew you to the major?
I always knew that I wanted to be an English major. However, I confirmed that Case Western was the right place for me when I visited the English department before becoming a student. I realized that though the department is small, the faculty is award-winning, experienced, and really caring, which made me really excited about being an English major here. Being the minority as an English major means getting first grabs at writing opportunities; it means standing out. Something else I really like about being an English major is that I can combine my major with anything else that I’m interested in. Some students do English and Cognitive Science, English and Psychology, English and International Studies, English and Computer Science, etc.. There are endless opportunities and endless tracks that I can make my own.

2. How has your English major prepared you for life after graduation?
Although I haven’t graduated yet, English majors are often praised for being able to analyze situations really well, which comes out of our critical analysis practice when we write essays. I find that I use my analytical skills in general. Also, discussion is a big part of being an English major. I love to discuss universal topics like identity, social justice, discrimination, and really get to the root of it. After only a year of English classes, I have significantly improved in discussion, and in being able to explain exactly what I mean in words.

3. What is it like being an English major at Case in particular, with its perceived focus on the sciences?
I think there’s this belief that there are absolutely no opportunities for English majors on campus because all the attention is on the medical and engineering schools. But I was really surprised to find that because the English department has such experienced and talented faculty, there’s this behind-the-scenes work to provide the best opportunities for English majors. The department lets us know about competitions, writing jobs, and authors that are coming in. This year alone, I’ve met Elizabeth Gilbert, Khaled Hosseini, Zadie Smith, and Chang Rae-Lee, from Writer’s Center Stage, which is a Cleveland Public Library program that brings in authors to speak. The program is hosted on campus. It was such a surreal experience getting to hear and actually meet these authors, and as a writer, I absorbed their experiences and learned from them. There’s also The Observer, CWRU’s campus newspaper, and The Athenian, a humorous magazine to write for and get your work out there. I also realized that several departments at Case Western, not just the English department, are in deep need of writers and Humanities majors. That’s where we come in!
There’s not a shortage of opportunities for English majors here. We just need to have our eyes and ears open at all times. Cleveland itself is actually a very artsy place; if you look closer, you’ll find amazing opportunities.

4. Why would you encourage a prospective English major to sign on?
A very cool thing about Case Western is that Humanities majors can make their own track. If you’re really interested in several things, not just English, you can absolutely create your own schedule and graduate with several degrees. In addition to this, like I said before, the faculty here is award-winning. Their experience and willingness to help you are invaluable.

English majors have to be go-getting anywhere, and Case Western really rewards you with beneficial opportunities when you reach out and grab them.
Also, to a potential English major out there, don’t be afraid to contact English majors on campus to get some background. We’re happy to help, and there’s more of us than you think!