Interview with Will Allison (’91)

Q. Are you the kind of writer who needs to make a departure in terms of language, emphasis, viewpoint, structure, etc. from one book to the next? If your two books faced off as opponents, what would be the strengths of each?

A. I wouldn’t say I have an intrinsic need to make a departure with each book, only a need not to tell the same story twice, or at least not the same way twice. So it’s the story that dictates my formal and stylistic choices, notwithstanding whatever I might think I’m doing at the outset.

For instance, I originally intended to structure Long Drive Home entirely as a confessional letter from the protagonist, Glen Bauer, to his daughter, Sara. But after months of wheel spinning, I finally realized that I needed to communicate a lot of information to the reader that Glen would never bother to put in a real letter—stuff Sara already knew, stuff he wouldn’t admit to her, etc. So I changed the structure of the book, retaining excerpts from the letter but mostly using a more conventional first-person narration.

A similar thing happened with the book’s tone. Initially, I conceived of Glen as having a more ironic outlook. But Glen is responsible for the death of a teenager, and his irony made it seem like he didn’t care enough about what he’d done—a fatal flaw in the story’s tone. So I made him more earnest, more serious, with less psychic distance from the events he narrates. Again, the story dictated my choices.

Last spring the CWRU Community Writing Program launched its pilot at the Lee Road branch of the Cleveland Heights Public Library. Comprised of volunteers from the English department, the CWP provides drop-in writing assistance to adult members of the community. In an effort to put our teaching expertise to work, English lecturers Summer Harrison, Josh Hoeynck, Eric Chilton, Bryan Conn, and I came together last fall to start the program.

On Tuesdays, Thursdays, and Saturdays during the semester, we staff a table in the library near the busy computer lab. We aim to create a space of contact between the rigorous research and teaching of the English department, and the valuable experiences and texts of community members. We believe that every writer needs a reader, and that as teachers and scholars, the discussions we have about writing should not be limited to the borders of our campus.

I am continuously impressed by how much of the learning that goes on in our meetings is reciprocal. I might be the writing “expert,” but in doing this work I have learned about city government, the publishing industry, the local poetry scene, and what someone working in inside sales does everyday. However, I think the biggest benefit to doing this work is the way that it reshapes one’s classroom practice. My own conception of writing has been expanded by thinking through writing projects alongside people with diverse experiences and backgrounds and then drawing on these ideas when back in my classroom.

We are gradually building a reputation as a valuable resource. In our first semester, given the current economic downturn, we saw many writers working on resumés and cover letters for their job applications. We also saw a variety of writers working on letters to the editor, query letters, poems, job applications, websites, and book manuscripts. Just last week one of the librarians told me that residents were asking for us over our summer break.

As the program grows, graduates and faculty can look to us as a resource on literacy, public humanities, and writing as social action. It is rewarding work, and as we continue to develop the program this semester, we hope to secure funding for long-term sustainability, developing workshops, and furthering our presence in the community.

Bill Marling was interviewed by Jonny Diamond for the BBC about Cain’s novel The Postman Always Rings Twice at the Diner on E. 55th St. His interview is available here.

Chris Flint‘s book, The Appearance of Print in Eighteenth Century Fiction, will be available on November 30th. 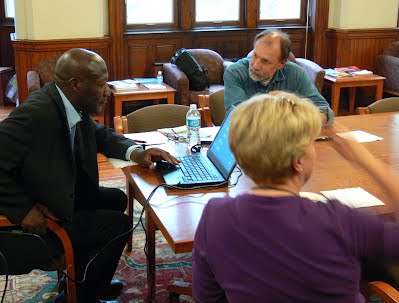 The play’s title character is based on a real person from Kampala in the 1940s, described by critic Margaret MacPherson as “an elderly man, carrying a long [Ngalabi] drum. . . . He was unshaven. His hair was wild and long and grey. He often wore a tattered bark-cloth and sometimes his feet were done up in bits of old sacking. And his legs showed how often he walked on dusty, murram roads.”

The play is representative of first generation African playwrights who were brought up reading Shakespeare and Sean O’Casey and delighting in indigenous myth-making, thereby disguising their social criticism.

Before coming to CWRU, Seremba received his Ph.D. from the Samuel Beckett Centre, School of Drama at Trinity College in Dublin. Seremba is an actor as well as a playwright. His best-known play, Come Good Rain, describes his own political struggles which culminated in an unsuccessful assassination attempt against him.

As Seremba recalled: “I was taken and shot and after the fifth bullet one of the soldiers shot a rocket propelled grenade which exploded into my thigh. I rolled into a marsh. Bullets whizzed by me. But it was dark. And the bullets whizzed by and missed.”

This semester, Seremba is teaching a class at CWRU on Post-Colonial African Theater. Because he is in town as a result of the Cleveland Foundation’s Creative Fusion initiative, an international artist-in-residence program, he is also the playwright in residence at the Cuyahoga County Library.

While digital technologies, like the internet and mobile phones, are praised for quickly linking users from across the world, these same technologies are blamed for impeding more conventional venues of communication. Often Facebook, Twitter, and other social media are accused of trading sustained human interaction for endless loops of trivial personal updates. Still many people feel an emotional connection with and through these mediated, digital experiences.

My latest research project explores these experiences and the potential consequences of what I call the “affective circuits” of new media. In this ongoing project, I suggest that our interaction with networked digital media can be understood through a kind of neurological rhetoric, marked by pathways of feeling, sensation, and resulting affects and actions. Specifically, our physical interactions with computers (both mobile devices and desktop equipment) form an emotional and affective loop, or “affective circuit,” which makes possible our experiences of new media as well as how those experiences are represented.

This past September, I presented some preliminary work as part of The Baker-Nord Center’s Works in Progress series. This talk focused specifically on two new media works which profess to examine our affective engagement with technology by capturing and presenting these emotional experiences. Robbie Cooper’s Immersion is a video work that captures the verbal and facial expressions and emotional engagement of video gamers playing their favorite games. Through a camera placed on the other side of the TV screen, Cooper’s gamers seem to be interacting and emoting with us by way of the game. Jonathan Harris and Sep Kamvar’s We Feel Fine is an online site that uses an algorithm to data mine blog posts, collecting and cataloguing online expressions of emotion and sensation. Whenever a blogger uses the words “feel” or “feeling,” We Feel Fine anonymously harvests those sentences and any images posted along side them.

My larger project seeks to understand the bodily interactions, embodied connections, and affective circuits formed between human users and technological objects. To do this, I will analyze such digital media as mobile phones, smart pads, webcams, YouTube, video games, and digital art.

Christine Mueri (’11) has been promoted and now works as an editor for the top-tier clients of The Stelter Company, a marketing firm in Des Moines, IA.

Iris Dunkle (’10) has had poems appear in The Prose-Poem Project and Radius.

Traci Arnett Zimmerman (‘04) is an associate professor in the School of Writing, Rhetoric, and Technical Communication at James Madison University, in Harrisonburg, Virginia. Her current research is inspired by her involvement with the Conference on College Composition and Communication (CCCC) Intellectual Property Caucus and her interest in the ways in which authorship theory informs and interrogates current IP law. She was recently appointed to the CCCC-IP Committee and recently elected to the CCCC Executive Committee where she will advocate for innovation and development of areas such as intellectual property, open education, and open access.

My forthcoming book, Partenia, A Pastoral Play is a bilingual critical edition of a 1586 play by noblewoman Barbara Torelli Benedetti (1564-post 1607) of Parma, Italy. Only a handful of literary scholars have ever made literary reference to her. An early modern Italian scholar at New York University who has translated works by early modern women told me she thought there was a sixteenth-century play written by a woman in the library in Cremona, so in 2005 I went to Italy to look for it.

I found the manuscript at the Biblioteca Statale in Cremona, Italy. The library took digital photographs and made a CD for me so that I could work on it here in Cleveland. It took me a year to transcribe it into typed Italian and to translate it. I had to hire a paleographer to help me with parts of it that were too difficult to decipher. In 2006 I got a $20,000 dissertation completion fellowship from the Baker-Nord Center and went to Italy for two months to research Torelli’s life and contemporaries and to work with the manuscript itself.

Although, she enjoyed considerable recognition for her talents while alive, her play has never before been transcribed from or published in any language. Correspondence with her contemporaries reveals that the play circulated in manuscript and was rehearsed for performance soon after it was completed. The play is noteworthy as a contribution to the development of the tragicomic genre that was to influence so many Renaissance playwrights (including Shakespeare) and as an example of a profeminist voice in a patriarchal age.

The publication is forthcoming in late 2011 or early 2012 by the University of Toronto’s Center for Reformation and Renaissance Studies as part of The Other Voice series (formerly with the University of Chicago Press). My collaborator, Lisa Sampson, is a specialist who has published a lot on pastoral drama and who could help me translate the sonnets written by Torelli’s colleagues to endorse the play, which are very tough to translate. Once Lisa and I agreed to work together and had our proposal accepted by the publisher, we dug in deeper to find more details about Torelli and found several poems written by her that had actually been published in some sixteenth-century anthologies of verse. References to her work by her contemporaries lead us to believe that she wrote a lot of poetry, but the play appears to be her only major work.