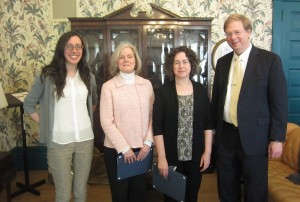 The English Department, SAGES, and the Writing Program are pleased to recognize this year’s winners of teaching awards and student writing prizes.
The Jessica Melton Perry Award for Distinguished Teaching in Disciplinary & Professional Writing recognizes outstanding instruction in writing in professional fields and/or disciplines other than English.

This year’s winner is Helen Salz, Professor of Genetics and Genome Sciences, with a secondary assignment in the Center for FNA Molecular Biology.

In addition to her laboratory research, Dr. Salz is a member of editorial boards for scientific journals, review panels for funding agencies, advisory groups for the Genetics Society of America, and serves on the Board of Directors for the National Drosophila Society. These professional activities inform the ways that Dr. Salz works with graduate students, especially in GENE 511, her department’s second-year Ph.D. graduate writing workshop that asks each student to produce a NIH R01 style research proposal.

When she designed this course eight years ago, Dr. Salz was meeting a need she saw in the graduate students’ training.  The course was an immediate success: her colleagues report an “unprecedented” growth in students submitting and receiving pre-doctoral fellowships, and slots on NIH training grants.

One of Dr. Salz’s students writes that “her greatest strength is her ability to cultivate a nurturing learning environment while encouraging independent development of thoughts and ideas.”

Another writes that “The benefits of [the course] extend well after the one semester….A fellow student…has become my regular reader on fellowship applications and manuscript submissions.”

Dr. Salz describes the importance of writing to scientific innovation this way: “Grant proposals have a scripted structure, yet the best grants read like a novel; they open with a hook (the burning question in the field) and end with a satisfying conclusion (the exciting new knowledge that will be obtained from the proposed experiments).  Without an exciting and well-written narrative, even the best science is unlikely to be funded.”

This year, the winner is Georgia Cowart, Professor of Music.  Dr. Cowart has received numerous teaching and research awards, as well as National Endowment for the Humanities and American Council of Learned Societies fellowship support.  She has taught in the SAGES program from nearly its inception and this fall, she embarked on the adventure of teaching her First Seminar with a reduced writing support model.  The process of taking on solo responsibility for responding to her students’ writing was, in her words, “gratifying.”  She reports that she and her students developed a “bond through [this] earnest, shared endeavor.”

Dr. Cowart’s students “routinely remark that she is a highly demanding yet also trustworthy and devoted advisor and writing instructor, one who hold them to high standards and patiently mentors them through the process of meeting those standards.”

Her students also comment that she balances attention to writing and reading in ways that help them understand the diverse audiences to whom they are writing.  One student writes that Dr. Cowart “taught me that my own voice was powerful enough to convey an idea.”

In her own reflection on her teaching, Dr. Cowart says that she “shares with [her students] her belief that through writing we learn to know ourselves and each other and through writing we find our meaning and place in the world, one ‘I Say’ at a time.”

The WRC Excellence in Consulting Award recognizes outstanding writing instruction for students of the University and exemplary service to the Writing Resource Center during the academic year.

This year, the winner is Cammy Sray, an MA student and graduate teaching assistant in the English department.  While she has only been teaching writing through the WRC for two semesters, Ms. Sray has impressed her students and her colleagues with her care and attention to the writing process.

In describing her tutoring style, she writes: “I try to foster an environment of trust that begins with first impressions….[and continues by] cultivating a conversation between two learners in the social act of writing.”

One of Ms. Sray’s students comments: “She is very responsible, always patient,” while another notes that she is not only “very nice and patient,” but is  “Always trying her best to help me with my papers and give me useful advice! She really does deserve the award! Best tutor ever! ”  Yet another refers to her as “the most excellent tutor in critical thinking and examining the writing process in the world.”

One student summed up the review committee’s evaluation quite well, writing: “Cammy was an excellent source of advice for learning how to better revise the specific essay I went over with her, but also in how to approach academic papers at this level. … That has helped me to change the way I look at writing.”

The University Seminar Awards are judged in September – and recognized at the Celebration of Student Writing in December of each year.  The winners for Academic Year 2012-2013 are:

The First Seminar Awards are judged in January and recognized at the Celebration of Student Writing in April each year.  The winners for Academic Year 2013-2014 are:

And Honorable Mention to:

You can read all of these outstanding essays in the booklets available on the Writing Program website: http://www.case.edu/writing.

The Jessica Melton Perry Award was established in 2009 by Edward S. Sadar, M.D. (ADL ’64, SOM ’68), & Melinda Melton Sadar (FSM ’66) in honor of Melinda’s mother, who worked in the Center for Documentation and Communication Research at Western Reserve University from the late 1950s into the late 1960s.
Previous
Next